How The Media Made 2020 Look Exceptional For Mortality

Consider this article from the Daily Mail that appeared at the start of 2021:

The article began with these sensational statements:

ONS figures show there were 608,002 deaths in England and Wales in 2020
This is the highest annual total since 1918, the year of the Spanish flu pandemic
The 75,925 'excess deaths' figures is the highest since the Second World War

This is a common technique that the media use, they first draw your attention with a shocking headline, followed by a few shocking paragraphs, and then they gradually admit the truth in subsequent paragraphs to those who are still reading the article. In the tabloid media, many readers will not even get further than the first few paragraphs, as while the reader is making their way through to the boring details of the (overly long) article, they are simultaneously distracted with pictures of scantily clad women and celebrity gossip headlines all down the right hand side of the page. You also have to scroll past a large picture of a temporary mortuary in this particular article, which further goes to create an impression that something terrible is happening.

A number of shocking statements follow in the next few paragraphs, such as:

Sarah Caul, of the ONS, said the death toll in 2020 was ‘extraordinary’ and added: ‘With the pandemic ongoing, we expect to see more deaths above the average, and it is unknown how long repercussions of this pandemic will be felt.’

The claims at the top of the article are at first presented without the context of the fact that the population of the UK has been steadily increasing throughout the periods mentioned. Only quite a few paragraphs down does the writer briefly admit that:

changes in the age and size of the population mean this is not a like-for-like comparison.

The number of deaths as a percentage of the population is in fact a much less spectacular statistic. Since 1918, the year mentioned at the start of the article, the population of the UK has in fact nearly DOUBLED, and so the death RATE in 1918 was in fact nearly TWICE as high as the death rate in 2020, and the Spanish Flu epidemic killed many young people whereas mainly very old people were dying in 2020 (this last important fact is not even mentioned at all in the article).

It is true that there was an increase in the death rate above the 5 years immediately preceding 2020, but these years saw a historically low death rate never before seen in the UK.

Even the British Medical Journal played a very similar trick on its readers in an article in April this year:

UK deaths in 2020: how do they compare with previous years?

The article begins by setting the tone with this statement:

The first graph presented looks pretty compelling, just as in the Daily Mail headline above our attention is drawn to the fact that the overall number of deaths was only higher in 1918:

They then go on to put this in context however, explaining the increase in population size and showing the crude death rate in this graph, suddenly 2020 doesn't look remotely comparable with 1918:

Further down still they reveal the age adjusted graph, which is far less shocking still (note that this third graph doesn't even show as far back as 1918, it starts in 1942): 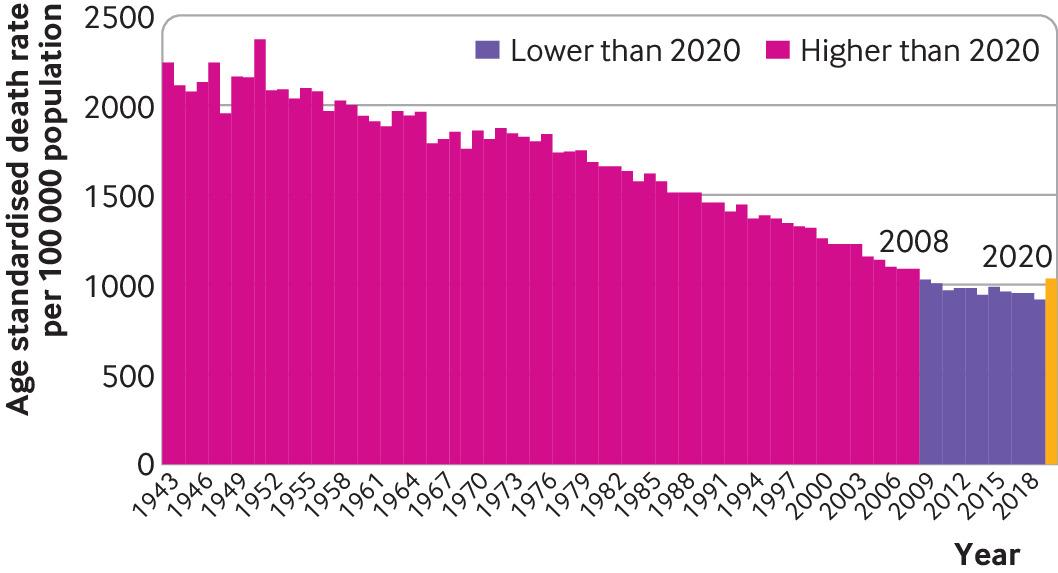 Consider also this superficially shocking headline from the Guardian (August 2020) which tried to portray Sweden as an irresponsible country for not introducing a strict lockdown:

Quote from the article:

Covid-19 caused about 4,500 deaths in six months to end of June as Sweden opted against strict lockdown

Next they emphasize the negative comparison with other Nordic countries before slyly admitting that the death rate was actually lower in Sweden than in the UK:

Covid-19 claimed about 4,500 lives in the period to the end of June – a number that has now risen to 5,800 – a much higher percentage of the population than in other Nordic nations, though lower than in some others, including Britain and Spain.

Once again, the further you read into the article the more the writer puts the numbers in context:

So the death RATE again is nowhere near the highest rate seen in the last 150 years in Sweden, in fact it was much higher in 1988 than in 2020, and similarly it was around the 30 year average in 2020 in Sweden just as it was in the UK. As has been happening in many Western nations, Sweden's population has been steadily increasing to new highs even in recent years due to mass immigration, so it's not really sensational news at all if the overall number of deaths per year has also been increasing to new highs. Just as in the UK, their population is also aging as well.

Almost every word in these articles may be technically true, but by focusing in particular in headlines on the total numbers of deaths, and by using misleading comparisons, the media succeeded in creating an entirely false impression that 2020 was a wildly exceptional year for mortality. Once you put these numbers in context by looking at the death rates rather than the total numbers of deaths, you see an entirely different and really rather unexceptional year, just slightly above the 5 year average but below the age adjusted 30 year average (i.e. once you also consider the additional factor that the average age in populations of developed nations is increasing). The question is why did almost all mainstream media outlets conspire together to create such a false impression?

In the last post I also mentioned other techniques that have been used to create a false impression, such as the narrow focus on comparison of the death rate with the 5 year average, the emotive uses of individual cases of young people dying, the statistical trick of adding the "COVID-19" death count over multiple years now, and the sheer cumulative effect of people being bombarded every day with relentless reporting of the "COVID-19" situation:

What do you think? Please leave a comment below.